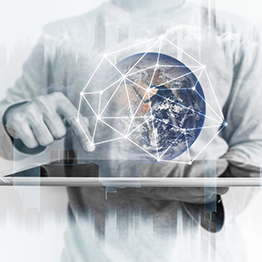 Yılmaz Machine has taken another important step in digitalization, one of the most important agenda items of global production. Focusing on digital transformation studies in its marketing strategies, Yılmaz Machine aims to market its products worldwide and strengthen its current markets with the "Digital Studio" it has established. Yılmaz Makine continues its digitalization efforts, which are becoming increasingly important during the epidemic period all over the world. Exporting to more than 95 countries in five continents, Yılmaz Machine opened the "Digital Studio" and renewed Yılmaz Machine official website, which it established in order to increase its power in global competition and to deliver its products to more markets around the world, at the "Digital Transformation Summit" held on 8 June. ” and introduced it to business partners and the public. Yılmaz Machine, which has managed to become one of the leading brands in the country and abroad with its 44 years of experience in the PVC and aluminum profile processing machinery sector, also shared the "New Normal" strategies that emerged after the epidemic with its business partners and the public at the "Digital Transformation Summit" event, which it organized as a first in its sector shared with. With the theme of “Join Our Digital Transformation Journey”, the event, which was held online on the official YouTube channel of Yılmaz Machine, was attended by Abdullah Yılmaz, Chairman of the Board of Directors of Yılmaz Machine, Deputy Chairman of the Board of TİM and Chairman of the Board of the Machinery Exporters' Association Kutlu Karavelioğlu, General Manager of Yılmaz Machine Sales and Marketing. Ali Snopçe, Production Facility Manager Arslan Kayaoğlu, Yılmaz Academy Manager Eray Çelik, After Sales Support Senior Manager Vasfi Şahin, Marketing Manager Barış Yıldırım and Domestic Sales Senior Manager Serdar Akgül attended as speakers. “WE WANT TO BE DEVELOPING AND PRODUCING TECHNOLOGY, NOT APPLICATION” In his speech at the opening of the event, Abdullah Yılmaz, Chairman of Yılmaz Machine Board of Directors, said that digitalization is one of the most important agenda items all over the world and said, “Digitalization is one of the main elements of progress today. Today, while digital technologies are directly involved in the way of production and production, they also lead to a radical change. Companies that do not digitize are now weaker in competition. Our aim is not only to keep up with the digital world but also to direct our industry as the developer and producer of these technologies.” said. Underlining that Yılmaz Machine is the export leader in the PVC and aluminum profile processing machinery sector, Abdullah Yılmaz continued: “We export to more than 95 countries with our 120 dealers around the world. Our goal in the new period is to move Turkey forward in exports. For this, we will benefit from the advantages of digitalization to the fullest.” “YILMAZ MAKINE SHINES IN EXPORT” Kutlu Karavelioğlu, Deputy Chairman of the Board of Directors of TIM and Chairman of the Board of the Machinery Exporters' Association, said, “Our machinery exports have reached 20 billion dollars in the last 12 months. However, our total imports exceeded 30 billion dollars in the last 12 months. Among the branches that make up this gap are machine tools. Because machine tools are one of the most targeted areas. We are surrounded by West's credited goods on one side and Eastern dumped goods on the other, and importers are running incredible campaigns all over the world. However, in this product group, we do not see the same import pressure in the machines produced by Yılmaz Machine. On the contrary, we have a foreign trade surplus in the branches led by Yılmaz Machine, and in these branches, Yılmaz Machine has a 29 percent export share in milling cutters, 31 percent in circular saws, and 38 percent in machining centers. This is a tremendous achievement. Currently, there is a great interest in Turkey from abroad, large funds are in the race to buy from the Turkish machinery industry. The reason for this is not low prices, but the quality of our machinery industry. Production is being shared again in the world, and we are consolidating our position. On this occasion, I wish Yılmaz Machine success in its digitalization journey.” used his words. “TECHNOLOGY INVESTMENTS ARE OUR MOST IMPORTANT STRENGTH” Production Facility Manager Arslan Kayaoğlu, in his presentation, said, “As the old saying goes, seven climates; We sell 300 different machines in 70 main groups. Production and exportation in this range is difficult, but we have already challenged ourselves. I believe that we will stand out from the competition with our six new technology-intensive production lines, three of which have been completed and three of which are still being assembled in our factory. The technology investments we have made and will make will be our most important strength in this process. Our main goal is to transfer the benefits we will provide by focusing on production technologies to all our stakeholders.” said.
Return To List